I've been way too busy to post anything since October...so what's been going on?!

Well, you won't be surprised to hear a lot of gigging has happened and we played with The Buzzcocks on the Isle of Wight a few weeks ago, from which the live video above to "Get Me" is taken. There's loads more live videos on our Youtube page, and photos from the gig are here. It 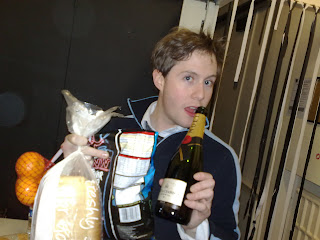 really was a brilliant night, and thanks to Doug Alldred and Airon Baker from Blunt Promotions for putting on the show. Special thanks to Doug for the quite incredible aftershow party, of which we're not going to say too much (stronger Honey next time Doug?!) apart from it went on past 7am and Doug makes the BEST cocktails...oh, and his Guinness "surge" device is amazing, as is his vinyl collection.

The Buzzcocks were really nice chaps, and we had quite a time with them after the show. Must remember to include four bottles of Champagne on my next rider too....

Well, the big news is that from 17th to 21st January, we'll be recording a brand new 4 track EP at Sawmills Studios with producer John Cornfield. John produced and mixed several of my favourite albums, including "Origin of Symmetry" by Muse, and "In it for the Money" by Supergrass, though he's also worked with Razorlight, Oasis, Robert Plans, The Verve, The Stone Roses etc. The studio is in the most beautiful areas of Cornwall, and can only be accessed by boat...yes, we'll be transporting all the equipment from our van to the studio by the river, as you can see from this photo: 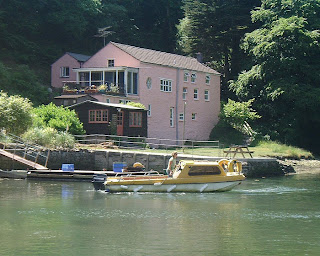 We've firmly decided on three of the four tracks we'll be recording...which are:

We also need to decide upon a NAME for the EP...which might be based on some of my lyrics - suggestions welcome on all counts, though don't feel bad if they're ignored...it just means they're rubbish.

Oh, and "Lover, Killer" has been used by a New Zealand company in a Skiing video which you can see here. It's also now up on Air New Zealand, if you happen to fly with them....

ANYWAY, all of this is all piffle, compared to the GIGANTIC NEWS that the FANS IN OUR VAN HAVE NOW BEEN FIXED. No, we don't carry repaired girls around in it, I mean the HEATING is fixed. What better time to have done that too, than after months of FREEZING 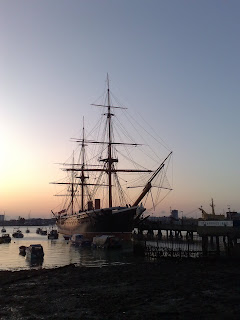 COLD?! Honestly, this will improve my life immensely, and I might finally start to feel better. We'll be announcing a big UK tour shortly, and I think we all would have frozen to death without this. The wheel that nearly came off the van when we were driving (which would have killed us), has also been fixed. So that's good.

Those of you who have had the time and strength of mind to have read my previous blog entries will know that I had....er...ALL my stuff stolen on my wild European Road Trip with Jonno in September. Luckily I was insured, and you'll all be as delighted as I was to hear that out of about £2,000 worth of stuff stolen, I've received the princely sum of £164.74. Isn't life so very fair?!

However, on the bright side, I DID manage to get another Mickey Mouse top after months of searching Ebay.

The photo above and right is HMS Warrior in Portsmouth Harbour, which I took just before getting the ferry to the Isle of Wight. Pretty pretty!

IN THE NEXT BLOG: There'll be news (and maybe even a snippet) of the World Cup song I've been asked to write, as well as video compilation I'm putting together from the filming I did on the YETI tour way back in 2008....PLUS more random photos and weird videos.

I'll leave you with photos from our Death Disco Christmas Party, and just for a laugh, a video (which someone uploaded just six months ago and I found by chance) of our playing a song we never play anymore nearly two years ago.....ah, the memories!

P.S. I ramble on Twitter sometimes.
P.P.S. I've got a new girlfriend.

"Desperation is the raw material of drastic change. Only those who can leave behind everything they have ever believed in can hope to escape." William S. Burroughs.