Head in My Hands by nigelthomas
Dear reader,
The little player above will play a new acoustic song, "Head in My Hands" which I wrote at Heathrow Airport. It's based on a true story too.
Well, the big tour is now well and truly finished, and we've just been doing the odd festival gig to keep us going. Coming up we have....
18th July - The Electric Sound Cafe
(all day event with music and comedians at The Bedford in Balham. Buy seated tickets here, and standing only tickets here)
1st August - Frimchett Festival
4th September - Lodestar Festival

25th September - BFest
DÉBUT ALBUM RECORDING.
Straight after The Electric Sound Cafe this Sunday, we're driving through the night down to Cornwall to catch the morning tide to get to Sawmills Studio (see this blog entry if you don't know why we have to put everything in a boat to get to the studio) to start recording our yet untitled début album with John Cornfield. Since the end of the tour we've been rehearsing furiously, and we're very excited to record songs we hope you'll love as much as we do. 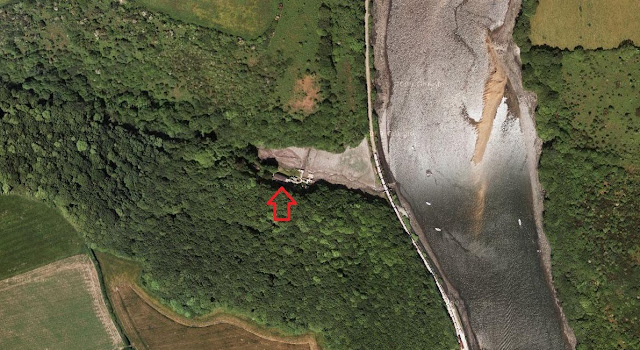 Courtesy of Google Maps, you can see above just how isolated the studio is - the big red arrow points to the studio itself, and you can see the trainline (and a train!) which runs alongside and under which we go in our little boat to get to the studio.
The Foxes Diary.
Since 2006, I've been writing an intimate diary about life in The Foxes, and it now stands at nearly 70,000 words. Having never show it to anyone, I've been thinking now might be the time to let someone have a read through and let me know what they think. I'm not Willy Wonka, so just email me or leave a comment on this blog if you'd like to be the one to read it, and tell me why you'd like to. It's got quite of lot of very personal things and events in it, and I'd rather not say the kind of person I'm looking for - so please don't take it personally if you're not selected. I'm sure most of you can think of nothing worse than trawling through thousands of words of my random thoughts and stories anyway!
New guitar:

Martin DX1RAE. She is beautiful and I love her. 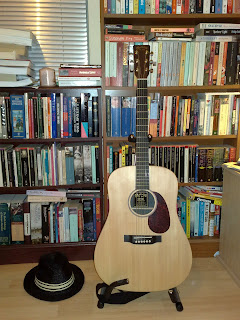 
Better than Hollywood.
I'm going to be an extra in a film in London tomorrow - I've got two scenes, one of which is at a strip joint in Shoreditch (no, it's NOT one of those films!) so I'll give you a full report on the next blog...


Finally....
I'm going to leave you with the interview we did at BBC Tees for the fantastic Bob Fischer during the last tour - we really enjoyed speaking to him, can you tell? Anyway, I think it's well worth a listen!!
BBC Tees- The Foxes interview with Bob Fisher by nigelthomas
Much love,
Nigel.
P.S. Wednesday always sees me DJ'ing at Death2Disco with Sir Danny Watson at Notting Hill Arts Club from around 7pmish. It's free entry, on 'till 2am and there's live music too. Come down (I won't be there on 21st though as we'll be recording then).

P.P.S. At last, someone actually asks me something about a song!!

P.P.P.S. If anyone can sort me out with a new phone, a laptop and perhaps a Topic bar, get in touch.