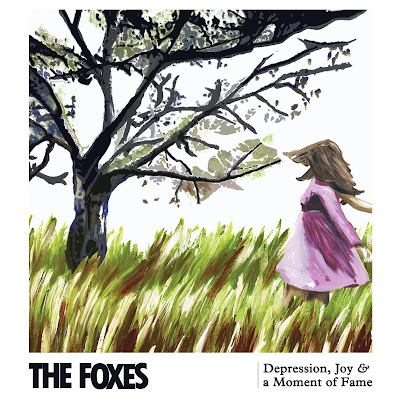 The picture of beauty above is the front cover to our new EP, "Depression, Joy and a Moment of Fame." It's an original piece of artwork by a very talented artist called Owain Thomas (no relation...that I'm aware of). Do check out the rest of his work. It's not finalised, but we're looking at a release date of around 12th April, with a big UK tour (and maybe Europe if we have time!) in April/May. The new tracks should be up soon too. Exciting times...I love touring, despite the long drives, sleeping in random places and the dodgy petrol station diet! Lots of gigs already booked across the country. Check out our gig listing on our Facebook or Myspace page.
Mastering, the final touch to the tracks, went very well with John Davis at Metropolis, and he dealt with our usual pestering to meet Damon Albarn, etc very well. Also need to thank John for having us at his birthday party, which is responsible for my very sore head this morning! Our producer John Cornfield also drove all the way up from Cornwall to be at the session to. What a guy! Here's a little video clip of the mastering - check out his three GIANT speakers (that John later climbed on...)
In other news, Jonno and I are heading off to Salt Lake City in Utah for a week to play some acoustic gigs, and hopefully do a few TV and radio spots. We've got one gig booked already at the Vertical Diner on 3rd March, and should have shows every night if all goes well, thanks to my good friend Rob Turner, a local music scene legend! We're also going to be flying first class, thanks to the lovely Amber who works for an airline and is getting us a rather amazing flight deal! Having never flown anything above cattle class, I'm going to be an excited little child on the flight - sorry Jonno, but I WILL be taking stupid photos and video, and making a fool of myself.
Speaking of the U.S. it's looking very likely that we'll be doing a week of shows in Los Angeles in June for various industry folk...but I guess we'll let the public in too! Anyway, more details to come. Mmm....In 'n' Out burgers.....
Big thanks to Laura at Exposure PR for giving us a host of clothes and shoes from Ben Sherman, Levi's, Original Penguin and Farrah. We've several photo shoots coming up, so look out for them then...and at gigs of course.
I'll leave you with this video clip in the van after John Davis birthday party, where the following can be ascertained:
1. Steve is the drummer.
2. It's dark at night.
3. Alex loves "penis."
I've probably left out loads of exciting things, but am too tired to think at the moment! Oh yes, we've just been confirmed for the main stage at a major UK festival. Can't tell you which one yet though.
Much love,

Nigel.
P.S. Part two of the Yeti Tour video is now up - check it out now, if you please!
P.P.S. A new song on my Facebook page.
P.P.P.S. CHECK OUT MY BAKING SKILLS!!
P.P.P.P.S. You can ask me silly questions, safely veiled behind anonymity by clicking here. 221 questions answered to date!


"Happy Birthday to me!" - John Davis, yesterday.
"He didn't really say that, but it WAS his birthday yesterday" - Me, right now, to you.