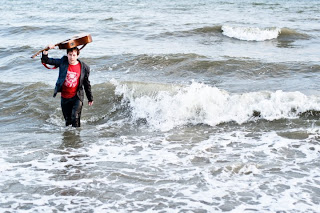 I've a few precious hours free, so thought I'd write a quick update blog as we've now got twelve gigs over the next eleven days and so this is the last chance I'll have to use a real computer!
Let's have a quick look at some of the recent reviews first:
* We're featured on "The Best of Myspace" from the lovely Gill Mills. Click here to listen.
* Remember the pictures of me in the sea in the last blog? It was at The Great Escape in Brighton and Stephen Brolan (as seen right) explains it all here. It's well worth a read! 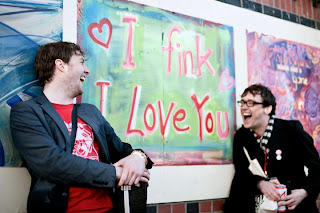 * There's another review of our new EP, "Depression, Joy and a Moment of Fame" on the Beat Surrender website. We're also doing a last minute gig for them in Leeds on Sunday straight after the England vs. Mexico game.
* A few dark snaps from our EP launch, courtesy of Adam Roberts. 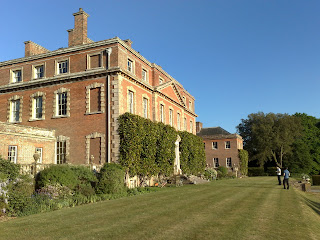 Recently, we played a gig at Trafalgar House, which is the mansion in Wiltshire given to Nelson's family after the Battle of Trafalgar. (I've included links in case you're not clued up on one of the most important person and battle in British history!) More recently, it was used in films such as "28 Days Later", "Pride and Prejudice" and "Emma". Being uncouth musicians, we were most excited about it's connection to the famous zombie film, as you can see:
Last night's gig at the Oakford Social Club in Reading was good, until we had to stop because water started pouring through the ceiling which the organisers seemed to be concerned might have led to us being electrically fried - not a bad way to go.
Coming up we've got:
27th May - Music Cafe, Leicester.
28th May - Cafe de Paris London.
29th May - Blyth and Tyne, Blyth (this is going to be mental)
30th May - Northern Monkey, Leeds - plus BBC Merseyside Session.
31st May - Liverpool IPO Festival (Cavern Club then the Cavern Pub!)
1st June - The Keys, Middlesbrough - plus BBC Tees session.
2nd June - Cafe Drummonds, Aberdeen.
3rd June - The Voodoo Lounge, Edinburgh.
4th June - Maggie Mays, Glasgow.
5th June - The Doghouse, Dundee.
6th June - Hootananny's - Inverness.
That's all for now! I'm off to audition to get a busking licence on the underground. Should be fun.
Do keep up to date on the tour by following The Foxes Twitter page. Oh, and I've changed the comment form so you can leave a comment without going through the stupid hassle of signing in to something. So say hello!
Much love,
Nigel.
P.S. I'm going to put up the full set of sea photos from Brighton on my acoustic Facebook page shortly.
P.P.S. I handed my petition to the General Medical Council earlier this week. Do take a moment to read, and please sign if you agree.
P.P.P.S. Ask me something.

'Excessive grief, like excessive joy, is a violent thing which is of short duration. The human heart cannot long remain in either extremity. The gypsy had suffered so much that surprise was now the only emotion of which she was capable' La Esmeralda, The Hunchback of Notre-Dame.