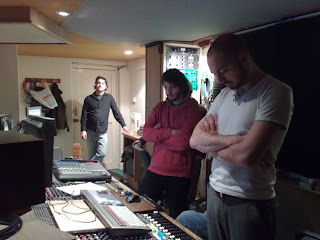 Today was a long hard day - but incredibly worth it. I woke up late, which was fine as Jonno was busy early doing some guitar overdubs. After a stern dose of medically necessary and industrial strength coffee, we then spent around four hours working on "No Reply" It has several tricky time changes, and despite exhaustive attempts, we weren't happy with any of the takes. So we left it and started on "Something About You" which we perfected in just a couple of runs - it has a really great vibe to it, and sounds just how I'd envisaged the "band version" when I first wrote it. It really is special. 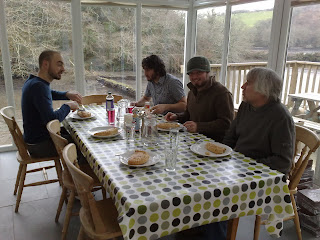 It was quite late by the time we'd finished the vocals, but we launched straight in to "No Reply" again and nailed it in the first take. As John said, "It sounds like you're enjoying yourselves now!"

It's been pouring with rain for most of the day. Whoever decided that having a roof on the studio was a good idea, I commend you. We would have been both soaked and electrocuted otherwise.

Tomorrow we're doing overdubs of certain backing vocals, guitar parts, hand claps and various other bizarre noises. My brother Ian is also bravely leaving his cat for the day to come and add some piano to the end of "Country Low" (there's a baby grand in the studio).
I know you'd kill me if I left you without a...erm...food update, so for lunch we had real Cornish pasties, and dinner was a sumptuous spicy Spanish pork casserole. Lemon cheesecake dessert was as doubly enjoyable as it was listening back to the four tracks in the control room. There MIGHT have been a little bit of childish dancing around at how good they sound! Not me though.

I'm sorry there's not more to report tonight - it has just been a very long day of solid studio work, without time to explore the forest or drown one of the guys in the river for a joke.

We're relaxing and watching "Carlito's Way" now. Oh, Alex has just passed me a cinnamon biscuit. What a nice guy.

P.S. I do love reading your blog comments (it'll be quite embarrasing if there are none to this one now...)
P.P.S. I've tried to decide which track sounds best, but I can't! They're even better than I thought they'd be.
P.P.P.S. The same links as yesterday: The Foxes Facebook. My Music Facebook. The Foxes Twitter. Do ask me something interesting too!
P.P.P.P.S. We're all exhausted, but happy.
P.P.P.P.P.S. That's enough!
P.P.P.P.P.P.S. Is it?
P.P.P.P.P.P.P.S. Yes.

"There's no law against cheescake in the control room" - John Cornfield, today.