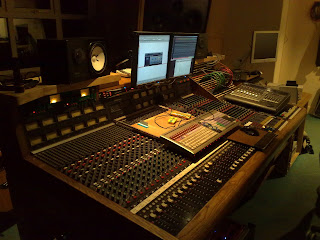 We've just finished fourteen hours solid work, and despite my having only managed to get to sleep at 6am, it's gone extraordinarily well!

So far, we've pretty much completed the basic tracking for "Get Me" and "Country Low" and I don't mean to hyperbolize, but they really are truly sounding quite fantastic. Spending the first evening getting the right mics in place (two for each guitar amp, and about a thousand for the drums) and checking the levels really paid off. The sound is actually quite different from our previous singles - still the same energy and excitement, but far more rounded and full. As y 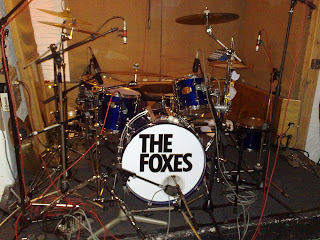 ou can see from the quote at the bottom of this blog, John seemed fairly impressed!
So far the trickiest part has been getting the tempo right as we're not playing to a click track, as this is far better for getting something with a bit of feeling and soul, not some regimented piece of manufactured pop.

The studio is incredibly secluded, and there's ZERO phone signal, so there are few distractions from making the best music we've ever done (in the studio at least...there's such distractions as a pool table, internet, digital satellite TV, loads of DVD's, computer consoles and beer up in the main house...) Dinner tonight was steak and stilton pie, with potatoes, salad, vegetables and hot buttered rolls courtesy of the lovely Ruth!

I've been doing plenty of filming, so will be putting together a recording documentary at some point. You would have seen some footage tonight, but Geve's computer is just not playing ball. It's not even changed for the game.

P.S. I've just heard on QI that people who sleep just 4 to 7 hours a night live LONGER than those who sleep 8 or more. RESULT! ;-)
P.P.S. Did I mention how fantastic the tracks are sounding?!
P.P.P.S. Some links: The Foxes Facebook. My Music Facebook. The Foxes Twitter. Do ask me something interesting too!