I've finally come out of winter hibernation! I would have slept longer but there are just too many exciting things going on. For example:


* We've been confirmed to support 'The Fun Lovin' Criminals' this summer - more details on their way.

* The Foxes début album is ready to go and will have a name and a release date by the next blog. Boy, it's good....


* We'll be playing the Isle of Wight Festival again this year. Oh, and the brand new V-Dub Island Festival.

* Want to hear one of our new album tracks? Listen again to Shell Zenner's show by clicking here!


Though it's been quite a while since I put my last track up "The Last Sunset" I've not stopped writing and have finally had time to record. This song is called "Stepping Up" and the lyrics are here. Do let me know what you think! Another new song, "Destiny" will be up soon.

I've got several acoustic radio shows and interviews coming up:


Sunday 13th March - 'The Danny Steele Show' on JNET Radio 1pm UK time. This is also being filmed for a documentary and you can listen in wherever you are in the world.

If you fancy hearing a particular Foxes song live, let me know below and I may just do it for you :-)


Best audience ever?! Could well be! We made a special trip up to Aberdeen last month firstly for an acoustic gig and DJ set with 'Kill It Kid', followed by a sold out show with 'The Dykeenies'' and 'The Winter Tradition'...video below of a brand new track "Sweet Little Wonder" which will feature on the forthcoming album (thanks to the very lovely Gemma for filming this!)


I was sent the photo below from after the gig and am including it because they were all a) Lovely. b). helped us with our gear and c) bought lots of merch....or in some cases, got it for free! ;-)

Oh, AND Ambrosia Linton who sent this one in: 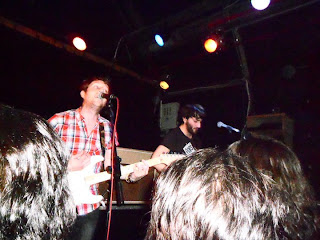 By the way, who finally got my battered tambourine in the end? It's been all over the world with us!


That's all for now - all our thoughts are with everyone in Japan.

Twitter
The Foxes Facebook.
My acoustic Facebook.
P.S. Do you speak Portuguese? You do?! Then check out this "Music on Strike" blog all about us.
P.P.S. I'm not really convinced by the new Arctic Monkey's song. Sounds too much like Kasabian...still looking forward to the album.
P.P.P.S. I'm also struggling to understand the popularity of The Vaccines. Maybe it's the reverb...need to hear the whole album perhaps.
P.P.P.P.S. I do however really like the new song from The Strokes.
P.P.P.P.P.S. Ask me anything by clicking here.
P.P.P.P.P.P.S I'll leave you with this rather cracking live video of "Get Me" from Aberdeen: