Videos, festivals and being drawn by strangers...

I'm going to start with the official video to "Country Low" - made in my very amateur but wistfully creative capacity using my HD camera and a 1987 adventure game called "Space Quest II" (which I played on my Atari St when I was a wee nipper) - if you've not seen it already I'd say it's well worth your time and the song's a cracker to boot ;-)

Please support us by buying a copy of the song from iTunes, play.com, amazon - but if you just want to listen, all our music is on Spotify.

We had a great time on the Isle of Wight playing with The Fun Lovin' Criminals at 'Legends in the Park' - I would have also seen Chesney Hawkes play earlier in the day, but I was eating at the time, and in music you have to have priorities ;-)

You can view several live videos of the show, including songs from our forthcoming brand new album by clicking here.

gear (thousands and thousands of pounds worth) was stolen.

Of course that doesn't cover the sentimental value of an instrument which has been with you throughout your entire career, covering all your gigs and tours, recordings etc :-(

The only reason my own electric guitar wasn't taken was because it was at Chandlers Guitars being re-fretted - suddenly that £240 repair cost doesn't seem as bad.
Watch these beautiful instruments (and band members) in action one last time in the video below of 'Send Me Nothing' - which will feature on the new album.
There are also rather ace live recordings of 'The Sad Thing' and 'No Reply'.

While randomly googling Knightsbridge (as you do), I came across a drawing that someone had made of me while I was busking at Knightsbridge Tube Station. A good likeness, would you say?! 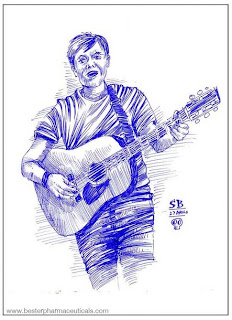 One thing I've learned being in the music industry is that EVERYTHING takes at least three times as long to do as you first thought...especially when you're doing it yourself. I can, however, tell you this:

1. We've got a name for the album.
2. We've got the front cover artwork through. It's awesome.
3. The next blog WILL be an album release date announcement - or I'll get someone to video me running naked round and round the flats where I live. Promise.

IN OTHER NEWS:
* Did I mention we played a gig with Newtown Faulkner? What a nice guy! 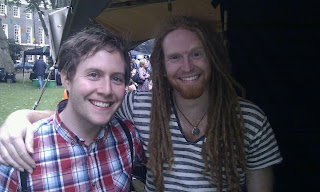 * I might be singing in an advert for the Olympics.

* Did you read our fabulous new biography?! CLICK HERE IMMEDIATELY IF NOT.

* Jon and I played an acoustic show at The Bedford in Balham for 'The Busking Project' - there's a version of 'Third Movement' on my new youtube page here.

* You can download my entire acoustic album for free by clicking here. It contains several versions of songs later recorded on the new Foxes album. Did I mention you could get it for free?!

* One of the songs from that album, 'Stepping Up' is featured on the brand new 'Sourmash Mixtape Vol. 1: The Walls are Not Listening' which you can also download for free - well worth it, there are some great tracks on there.

That's all for now!


P.S. I update both The Foxes twitter and my own twitter page. I am fairly amusing.
P.P.S. For goodness sake, download my album for free!
P.P.P.S. Thanks for your blog comments - they make me warm inside and I always read and reply.
P.PP.S. This blog was written to the sound of CD 1 of the new deluxe version of "The Sophtware Slump" by Granddaddy. It's a great album.

'Start living now. Stop saving the good china for that special occasion. Stop withholding your love until that special person materializes. Every day you are alive is a special occasion. Every minute, every breath, is a gift from God.' Mary Manin Morrissey.
'The receptionist at the second interview was way hotter than the first one, but the pay on offer isn't as good. Life is full of tough choices.' Hereward Swallow. *

* This is an exciting new feature of the blog where I take, without their permission, a Facebook status update from one of my friends and post it here as a traditional quote. The first to feature is Hereward, a talented musician and a great bloke. He asks an important question here - so which job would YOU go for? (I think the answer is basically gender dependent...)