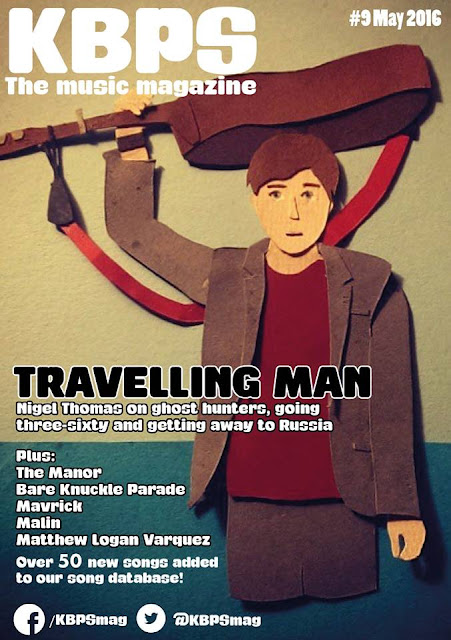 I'm on the cover of the latest edition of KBPS magazine in card format, which suits me I think. You can read the full interview here.

The glowing reviews for 'Travelling Man' are still coming in -

'Anyone looking for an engaging guitar record should look no further than this LP.' Rocky Road

'Thomas has a youthful, magnetizing voice that’s perfect for the kind of rock-jazz combo he creates.' Indie Band Guru

'...he continues to prove himself as a gifted songwriter, vocalist and guitarist.' Indie Biscuits

'An accomplished collection of songs from a man whose own musical journey has hopefully only just begun.' The Hearing Aid

If you've not yet bought a 'Travelling Man' it's available on heavyweight vinyl, CD and download. Links to all options here, grab your copy NOW!

I'm delighted to be playing XPO NORTH in the beautiful city of Inverness this year, the only English artist to have been chosen.

I'll be playing at the Blackfriars venue on Wednesday 8th June at 10pm...then driving straight back to London as I've got to get a ferry to a certain island to play a gig or two on that island...shhh....;-)

Full music schedule can be found here, there are some truly fantastic acts on the bill, it's an honour to be playing with them.

"XpoNorth’s influential music showcase takes music stars of tomorrow from the UK and beyond and places them on stages across Scotland’s most northerly city."

Speaking of Scotland, huge thanks to a DJ who is one of the greatest supporters of new music, Jim Gellately who recently played 'Ghost Hunter' on his Amazing Radio show. You can hear him playing it here.

Thanks also to Lizzie Capener who featured '5476 Miles' on her eclectic new RNIB music show 'Vibrant Vocals'. Hear it here and watch the stop-motion music video below.

On 1st June I have the good fortune to be playing with (and a solo set before) Tim Arnold who's launching his new single 'Money Kills Love', taken from the film Blood Orange starring none other than Iggy Pop! Full event details here.

Tim also has a rather epic fundraiser with some fantastic rewards (I'm getting the vinyl), which I urge you to investigate!

Tim, Darling Boy and I also have an exciting new musical project in the works. More on that to come.

My feature film 'Candlestick' is now available on UK, US, German and Japanese Amazon Prime, so you can watch it for free if you're a member.

"Music itself is going to become like running water or electricity. So it’s like, just take advantage of these last few years because none of this is ever going to happen again.
"You’d better be prepared for doing a lot of touring because that’s really the only unique situation that’s going to be left. It’s terribly exciting. But on the other hand it doesn’t matter if you think it’s exciting or not; it’s what’s going to happen."

David Bowie, in 2002, gives the New York Times a prediction about how the music industry will be in 2012.


"Movies are real! Music is real! It affects people, it's real. … The other night I went to a club and I watched a DJ control an entire room. Even politicians can't do that."