What an amazing time we've had! Let me explain.... 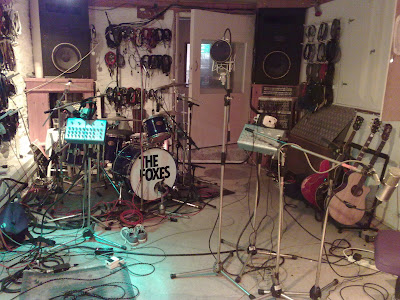 Sunday 18th July.
Played at The Electric Sound Cafe which was an all day music and comedy event at The Bedford in Balham, organised by Alex. We did a totally different stripped down set which went down really well - and Suzy felt especially good to play (no, it's a song). Saw a lot of other great acts, including our friends The Roads who were superb. Big shout out to Ayumi Suzuki who travelled all the way from Japan to see us!
Monday 19th July.

After a few hours sleep we left London at 3.30am to catch the 9.30am tide at Golant to get the boat to Sawmills. Amazed by how much gear we seem to have seeing it all loaded on the quay. The first day was spent initially dealing with an infestation of gremlins...there was a big buzz on the bass track (dealt with by spraying Alex's guitar in gloop) Jonno's amp developed a strange harmonic sound so we took it apart and had to fiddle with valves which were too micro-phonic...apparently....and then had to sort out the intonation on mine and Jonno's guitar. Still, we'd got a great take of 'Sorry to Leave You' by 10pm. All exhausted. It's lucky we loaded in in the morning as it poured with rain most of the day.

Today we finished guitar overdubs to 'Sorry to Leave You' and started and finished 'Suzy' - spent ages doing the vocal overdubs at the end of 'Sorry to Leave You' in the evening as they're really complex. Then we got a good take of 'Waiting for the Storm' and vocals (Jonno and I swapped on this one - he sung lead vocals and I did the guitar solo!)
Poured with rain most of the day. 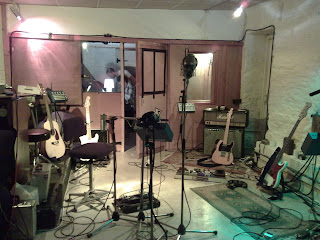 Although I can't give details, we've been approached by people from a major tv show who asked for instrumental versions of 'Get Me', 'Something About You', 'Bill Hicks' and 'Lover, Killer'. As we couldn't get hold of Sam Williams (who mixed the last two), we brought the raw recording of the songs to John Cornfield to mix. Watch this space!
Anyway, as we had a bit of time, Steve and I decided to do some filming on the train tracks (it's a single non-electric freight train line) across from the studio, and genuinely did nearly get killed by a train - I've never laughed so much.
Did this little video for you:


You can hear the original recording of this song on my Facebook page. It really was the first time it had stopped raining, and of course, it proceeded to POUR down in the evening. Speaking of which, we later recorded a great take of 'Sweet Little Wonder' (a happy, summery love song song written for no-one)
Friday 23rd July.

Jonno got up early today and was in full smug mode when I entered the studio in the morning as he'd already done all the guitar over-dubs on 'Sweet Little Wonder'! Somehow I managed to kick start my voice into doing the lead vocals on the track (normally it doesn't start to function before late afternoon) and then we finished off with a few little tweaks on all the tracks and a big listen through.
I really can't express how happy we all are at how the songs are sounding. Without wishing to sound too arrogant, they're going to fucking blow you away (there, I think this balances the fairly dry diary account of what went on!)

We played a celebratory gig at John Cornfield's local 'The New Inn' in Tywardreath (close to where we get the boat to the studio, built in 1775 apparently) which was packed and we had a great evening, which included a very entertaining house party 'till 4am with John and Alex. I would show you some video, but really can't! HUGE thanks to the lovely owners of the pub for letting us stay, and feeding us so sumptuously (amazing food including home made Cornish Pasties with "Fox" written into the crust!)

* We'll be back to the studio in two weeks to finish the album.
* Check out this new review of "Depression, Joy and a Moment of Fame" - it's really rather good.
* I had a great time playing at the Whitecross Street Party on Sunday, and met lots of genuinely lovely people, especially the girl in the blue dress :-)
* A new music video to "No Reply" is coming soon.
* I might be playing at an event for Prince Charles. Will let you know...

A question for you.
What tracks from our last EP should go on the album? All of them? None? What about the singles? I'd love your thoughts, and you can comment below without having to sign in to anything.
I'll leave you with this clip of Steve and I being silly on the tracks trying to record a song....

P.S. New songs coming soon!
P.P.S. the quote below the boating picture is from this video.
P.P.P.S. I am happy.
"I believe its no good to talk about your songs; its wrong. You should leave your songs alone and let them say what they say; let people take what they want from them."
Paul Simon

"Actually I don't know if honesty is a strength or some kind of weakness." Ani DeFranco

“Watching you walk out of my life does not make me bitter or cynical about love. But rather makes me realize that if I wanted so much to be with the wrong person how beautiful it will be when the right one comes along.” Anon.