With our début album announcement tantalisingly close I can think of no better way to precede this than by releasing our brand new band biography written by none other than Stephen Brolan, a very well respected and experienced writer.

Stephen also happens to be a long-standing fan of The Foxes so we were thrilled when he agreed to write our new biography. You can read more of his work here.

Enjoy! Some of it may just surprise you.

P.S. I've added some pictures which you can click on for large versions.

"While Nigel Thomas is not a super proponent of the notion of destiny – he’s pretty keen on being in charge of his own life, thanks very much – The Foxes frontman retains a firmness of belief that insists, in the context of all things, this is where he was always meant to be. From a very early age, it seems, there has been a niggling certainty about the path his eventual life would lead him. While most of us were still deciding whether we were going to grow up to be Superman or a dalek, Thomas was already tuning in to some future broadcast and humming along to its inaudible yet somehow irresistible tune.
“There was never any question about what I wanted to do – I’ve been singing since I was teeny-weeny,” Thomas says, the now twenty-something’s blue eyes still betraying a mischievous, childlike glimmer. “My father was a singer-songwriter and actually released a couple of singles that were recorded at Abbey Road. His career was kind of halted by meeting my mother and having two kids…” He grins rather sheepishly. “I suppose I see it as my job to not only follow in his footsteps but also make up for, well, ruining his life.”
With such adjacent family-oriented musical heritage (his brother, “the really talented one”, is also an accomplished composer), it would be easy to interpret a certain genetic obligation was a compelling factor, but for Thomas, whose calling had always mined deeper sources than mere duty, the only constant in terms of impetus always came from within. 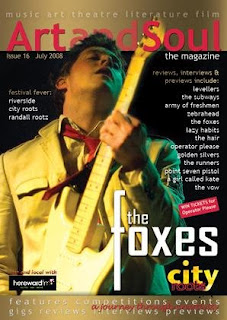 “I don’t feel any pressure from any other source outside of myself, and even then, it’s not as if there was any question about self-motivation that way either.” He pauses for a lifetime, which actually punctuates his addendum: “Writing and performing music is just something I’ve always passionately wanted to do.” Another thought occurs, and the calmest storm passes through his bright eyes – the merest, human flicker. “I mean, sometimes there are days – dark days – when I think I never want to pick up a guitar again, but that’s really like a blasphemy.” Thomas’s obvious earnestness almost cringes on that last notion, the very thought abhorrent. “I know I could never do that – I could never not sing.”
An amalgamation of insouciant, wide-eyed exuberance tempered by a steely determination, Nigel Thomas is perhaps something of an emblematic musician for the 21st century – a poster child for artistic self-government in an increasingly non-committal industry suffused equally by hyperbole and cynicism. His band, comprising lead guitarist Jonathan Bretman, bassist Alex Douglas, and drummer Stephen Wilde, are forged from an autonomous working ethic that typifies an indie spirit – in the truest, etymological sense – that seeks to cocoon itself from the barrage of broken promises laid on by the industry at large and focus its collective powers internally, beyond external influence. 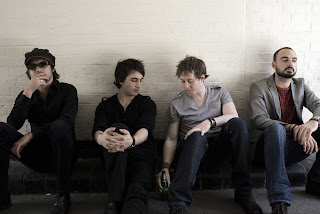 Having come together through various chance (fated?) encounters around the capital, The Foxes’ early years largely reflected that of any London-based band hussling the circuit: hold down the odious 9 to 5; gather funds for gear and maybe a clapped-out disaster on wheels; land a gig supporting the latest Camden-bound naval-gazers (“Some of them fucking need support – literally,” Thomas says: “They look half-asleep on stage”) and hope some A&Rs holes happen to share your vision and hand you the golden key to stardom. However, after a series of attempts to win the attentions of industry pedallers and pen-weilders, it soon became apparent they were banging their heads against a wall of indifference.
“We got so sick of the fact all the people we’ve approached nobody wanted to help us,” he says, the words entangled in a sigh probably echoing a billion other bands’ sentiments. “And when that happens to you long enough, either you sit back and feel sorry for yourself or you get out there yourself and say ‘fuck it’ and start helping yourself.” 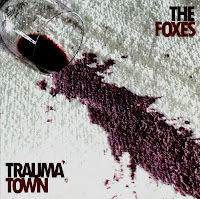 And help themselves and sayeth the words ‘fuck it’ they did, pooling all their resources – financially, practically, artistically – into an egalitarian unit that worked indefatigably of and for itself, from designing the artwork and heading up their own publicity campaigns to booking their own tours and putting out their songs independently – a process of grit and determination Thomas believes has stood them in good stead and provided a valuable learning curve. “Between the four of us we’d probably all make pretty decent band managers,” he laughs. “We’ve learnt so much from having had to do everything ourselves…” 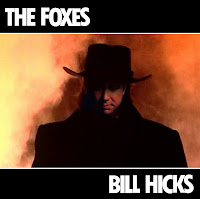 Having gathered enough resources to get some recording time, the band then self-released a couple of tracks on their own Room 10 label, and soon saw the fruits of their labour reap some serious kudos dividends (if not exactly financial avalanches), with singles ‘Trauma Town’ and ‘Bill Hicks’ (Thomas’s tribute to his comedy hero) reaching numbers 9 and 6 respectively in the UK indie chart. And following on the heels of this, attention from outside sources began to spring forth – a feature on myspace reaching the ears of a festival organiser, who invited the band out to the States as part of a cancer-awareness charity gig, which would in turn thrust an ultimatum in the faces of the then office-bound nine-to-fivers… 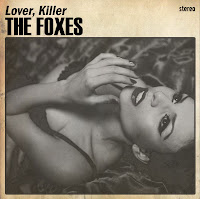 “We’d been thinking about quitting our day jobs for some time to focus on our music,” Thomas insists. “And when this opportunity came along, we knew we had a chance to do something about it.”
And so, in true fatalistic fashion and in sight of higher auspices, the four Foxmen fled the Apocalypse of their respective jobs and, using the springboard of the charity festival as a starting point, hurled themselves at the States with a series of tour dates that took in New York, LA and New Orleans, all fuelled by benevolent omens, a healthy ‘fuck it’ attitude, and a cashpot of ­golden handshakes. A month later, a return home with broader horizons would provide greater perspective and the ultimate catalyst that would shape their immediate destinies.
“When we got back, we thought, ‘well we could go back into our jobs’…” The uttering of these words, and the accompanying grimace, suggests this was never a real consideration. “Or,” he emphasises, “we could quit and get tighter as a band, and the best way to do that – earn money while honing our playing – was to do covers gigs.”

A poisonous word for much of the indier-than-thou purist Camden clergy, covers have nevertheless provided The Foxes with a niche that, while not their ideal situation, has allowed them to eschew the soul-sapping day jobs and self-sustain themselves on the way to their ultimate goal. After all, nothing worth striving for comes without its costs.
“It hasn’t been easy – it’s one of those things where you think it’s a bit like selling out and a bit soul destroying to be playing other people’s songs,” he says regretfully but without apology. “But it’s also enabled us to do everything we’ve done so far – and we’re a better band because of it. And however you look at it, we’re doing music for a living, and that’s what we’re totally absorbed in…” He trails off, grappling for the crux. “The main thing that frustrates me – when you see people get excited about songs you haven’t written – you just think it’s a shame people don’t go to many gigs of unknown bands and try to seek out new music for themselves instead of having everything force-fed to them in such a commercial, passive way. People want to be spoon-fed familiar things they know rather than seek things out for themselves, which I guess is just the way of the world, and you sometimes have to accept that.” 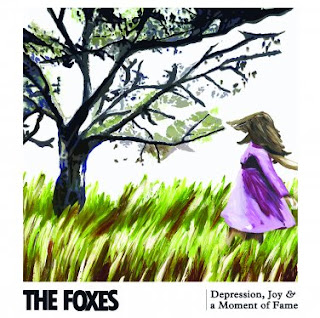 On this last point, Thomas is visibly choking on the words, as if the very notion of accepting anything other than what’s right and good would be tantamount to surrendering of the will – something for which The Foxes are clearly not accustomed. For a band still unsigned, who have given up their jobs and sacrificed the trappings of complacency to mine the chasm of their ambition, to achieve what they already have is testament to the strength of their collective will and character. Having gained the attentions of John Cornfield, after the mega-producer saw the band’s incendiary live show at – of all places – The Orange Box in Yeovil, The Foxes blagged, busked and covered-versioned their arses off for over a year to pool together the money to record their debut album with Cornfield at his famed Sawmills Studios – the results of which speak for themselves.
“Whatever happens, we’ve made the best album we could and we’ve done everything we can to make that happen,” he reasons, a distant look seeming to recall an abundance of chased rainbows. “After all we’ve been through, there’s not really much more we could’ve done…”
An entity unto themselves, The Foxes, as their moniker entails, is a sleek, nightstalking creature determinedly and surreptitiously surviving on its own terms, making familiar territory of blind alleys and, while retaining a true sense of kismet, charting their own course. For Thomas himself, fiercely proud as he is of he and his band’s achievements, the endeavour is far from over. Having come this far on a wing, a prayer, and sheer self-belief – via a wilderness of industry indifference – the crumbs of comfort are not commodities he is about to hang around for. 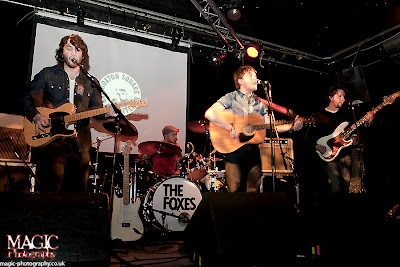 “Sometimes I might not have enough money to get something to eat, so I’ll have to go out and play music to people who throw coins at me, and I’ve got enough for lunch that day. But because all time and money is invested in creating something I love, it makes everything worth it. It would have been so easy just to go for a job in the city – but I wasn’t being who I think I should be, and you’re never going to be happy doing something that’s not you…” He stops, head cocked, as if hearing the distant hum of destiny’s broadcast to which he remains devoutly attuned. “Even if nothing comes of what I’m doing, I can at least look back and say I gave it my best shot…”
Armed with such unerring conviction and focus, aligned with the truest sense of purpose, Thomas’s aim could hardly be more keenly focused on its target. For some, things are meant to be. Others mean it so much, it’s destiny that has to fall into line…"